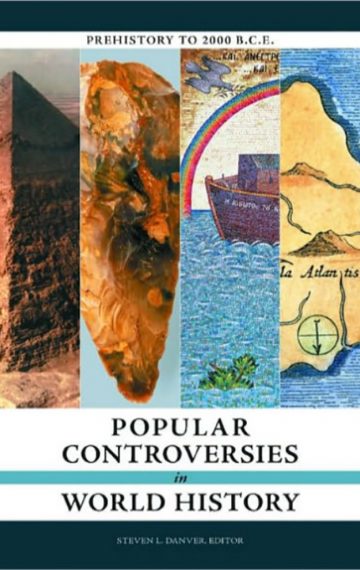 Popular Controversies in World History: Investigating History’s Intriguing Questions offers a unique way of looking at pivotal events and puzzling phenomena. From the geographic location of human origins to the purpose of Stonehenge, Volume 1 covers a series of ongoing debates that have captivated both the historical community and the public at large. In each chapter, established experts offer credible opposing arguments related to a particular question, providing readers with resources for independent critical thinking on the issue. It is a format that lets students, scholars, and other interested readers participate in some of the most intriguing conundrums facing historians today.

Volume 2 presents a series of high-profile debates from 2,000 years before Christianity to 1,000 years after, this volume provides a format that invites readers to draw their own conclusions. The Ark of the Covenant … The monoliths of Easter Island … The origins of the Celtic Church … The Toltecs and Mayans … The time period from 2,000 years before Christianity to the millennium gave rise to many mysteries that have intrigued historians for ages. Some are the sources of vigorously argued controversies that remain unresolved to this day.

Volume 3 ranges around the world and across 1,000 years of human history to explore mysteries that captivate the public and inspire the community of historians. Topics include Norse explorations of the New World, Galileo and the Inquisition, and the “lost dauphin” of the French Revolution. By providing authoritative reasoning to support both sides of these controversies, the work sets the stage for readers to investigate, speculate, and argue for themselves.

Volume 4 covers the modern world with chapters on topics such as: Could the Titanic have been rescued? Were Niccolo Sacco and Bartolomeo Vanzetti innocent? Was British Prime Minister Harold Wilson a Soviet spy? Popular Controversies in World History: gives students, scholars, and anyone interested in historical analysis the resources they need to critically assess these and other lingering questions of the 20th and early 21st century.

“These volumes of solid scholarship and coherent design will be of assistance to instructors preparing lesson plans as well as students compiling reports. Recommended.” – Booklist, April 2011