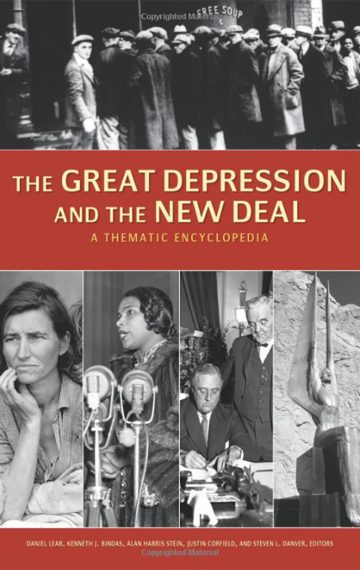 Breadlines. Hoovervilles. Unprecedented poverty. The Great Depression brought “The Land of Opportunity” to the brink of revolutionary upheaval. In response, Franklin D. Roosevelt’s New Deal redefined the government’s role in promoting the general welfare of its citizens. Now, at a time of increasing economic anxiety—with ongoing debates over government intervention and regulation—what can we learn by looking back at the most pervasive domestic crisis in U.S. history?

The book features hundreds of alphabetically organized entries in sections focusing on economics, politics, social ramifications, the arts, and ethnic issues. With an extraordinary range of primary sources integrated throughout, The Great Depression and the New Deal is the new cornerstone resource on a historic moment that is casting a shadow on our own unsettled times.

Reviews: The Great Depression and the New Deal

“…this work is a good choice to help students begin research on this era.”
– School Library Journal